Emotions are a natural state of mind that are derived from a certain circumstance, mood or relationship. In the current state of the pandemic world, we are feeling a range of emotions from sadness, loneliness to anger. As humans, we are naturally inclined to share those emotions with each other. We tend to share our emotions in order to feel better and lighter. The sharing of our emotions is parts of our daily lives but it is highly prevalent during difficult and traumatic times.

The COVID-19 pandemic, being one of the most difficult and hard times for this generation, has created a similar effect as described above. The anger, sadness, and loneliness caused by isolation and lack of interaction is being released with the use of social media. Social media is not only a way to communicate with each other, but a platform from which we can experience each other’s emotions, feelings and thoughts. It has become an outlet for the world to express their feelings and emotions through a click of a button. The fear of COVID is causing people to experience anxiety and threat, they are scared to lose their loved ones and things that they value. In a peer reviewed article , a cross sectional study was done to calcule the perception of threat from covid 19 and found that there was a direct positive effect from the perceived threat of covid 19 to depression, anxiety, and anger. They also found that there was an ongoing relationship in which threat caused the presence of the negative mood which in turn caused emotions of irrational and agitation leading to a promotion of threat (Pérez-Fuentes, Jurado, Martínez, & Linares, 2020)

Even though sharing your emotions is a positive thing , the constant negative environment can lead to a worsen state of mind. The constant exposure to negative news and intense coverage of the COVID-19 virus is leading to negative impact on mental health. The negative climate on social media leads to an emotional contagion which creates a negative impact on one’s mental health. This is mostly because social media rewards emotionally charged messages.

A social psychology concept that applies to this is of social cognition. Social cognition is the study of how people remember information and then interpret that information about themselves and others. Social cognition applies to this situation because it explains how the negative climate of social media can lead to an increased amount of negative emotion. According to social cognition the way we perceive things and our surroundings is mostly because of the state that we are in. Our current mood that we are experiencing impacts the judgement of the people that we meet. This is applicable to negative emotion and social media because if we spend most of our time on social media where there is a constant exposure of disasters and negative news , you are more likely to perceive the reality and the world in a more negative way.

Another social psychology that applies to this situation is the two factor emotion theory. The two factor emotion theory states that in order to experience an emotion, two factors must be present: physiological arousal and the cognitive interpretation of that arousal. First, physiological arousal must take place such as perspiration, heavy breathing or the racing of one’s heart. Then, after physiology, a person must make an interpretation of that arousal to explain the why that arousal took place. Most of the time the cognitive interpretation is done based on the reactions to the arousal made by other people. Previous studies performed by IAAP show that in a case study with 512 college students , results from a regression analysis show that a higher level of social media use is associated with a worsen mental health. The increased exposure to the disaster news from social media led to greater fear and depression for participants (Zhao & Zhou, 2020). 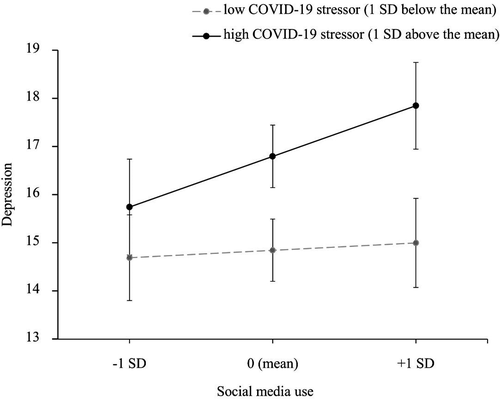 The two-factor emotion theory is applicable to the rise of negative emotion and social media because both of these factors are present in enabling the negative emotions. First the physiological arousal in this situation is the fear, anxiety and panic that people are feeling. The physical feeling of loneliness, sadness and anger are the arousal element of the emotion, primarily caused by the isolation during the pandemic. In addition to people feeling the physiological arousal they are sharing what they are feeling on social media, where people from around the world can interact with. Second, and the most important in validating those negative feelings is the cognitive interpretation of this arousal. The arousal in hand is the negative emotion felt by people and the cognitive interpretation is being derived from the people on social media. As more people share their stories and struggles, others also react to and engage with the similar negative feeling being felt. This results in validating the negative emotion but at the same time creating a climate of negativity throughout social media.

This entry is licensed under a Creative Commons Attribution-NonCommercial-ShareAlike 4.0 International license.

Need help with the Commons? Visit our
help page Send us a message

Built with WordPress Protected by Akismet Powered by CUNY